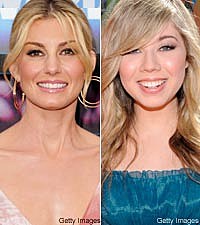 Teen TV star and Nashville newcomer Jennette McCurdy has been hand-picked by Faith Hill as her opening act at a couple of California concert dates in July. Jennette -- who is one of the stars of the Nickelodeon hit, 'iCarly,' will open for the country superstar July 23 at the Ironstone Amphitheatre in Murphys, Calif. and July 24 at the OC Fair and Event Centre in Costa Mesa, Calif.

About to turn 18 this month, Jennette actually scored her first acting job by way of Faith, when she was just 8 years old -- in Faith's music video for 'The Way You Love Me.' It was at that tender young age Jennette was bitten by the acting bug. It was also when she was stung with a burning desire to be a singer.

Jeannette has actually been a fan of country music since the time she was 7 years old, when her grandmother introduced her to Patsy Cline. She's been writing songs and poetry ever since. Last summer, on her 17th birthday, Jennette was signed to Capitol Nashville.

Her debut album, 'The Story of My Life' is due at the end of June. The first single from the album, 'Not That Far Away,' (which was chosen by readers of The Boot!) is a song Jennette co-wrote with Rachel Proctor and Blair Daly.

"Faith Hill was a huge influence in my desire to pursue a career in country music," Jennette says. "To open for her is an honor and I'm so thrilled!"

Filed Under: JennetteMccurdy
Categories: Country News
Comments
Leave A Comment
Back To Top