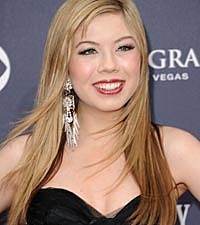 Jennette McCurdy proved her impressive star power after raising $140,000 for St. Jude Children's Research Hospital. The singer/actress surpassed her own lofty goal by $40,000.

Earlier this year, the 'iCarly' star embarked on her cross-country 'Generation Love' mall tour in conjunction with the release of her new single of the same name. Jennette's mission was to raise awareness and donations for the non-profit pediatric treatment facility.

"What a great few weeks this has been, being able to play for so many great fans that came out to the shows," says the singer. "What made it even better was the opportunity to partner with St. Jude and not only bring awareness to their life-changing facility, but also raise money to help the patients that come through their doors. I'm so proud and honored to be associated with St. Jude and their amazing cause!"

'Generation Love' is the latest single from Jennette's upcoming debut album. The tune, written by Tom Douglas, Heather Morgan and Ross Copperman, was produced by Jay DeMarcus (of Rascal Flatts).

Filed Under: JennetteMccurdy
Categories: Country News
Comments
Leave A Comment
Back To Top