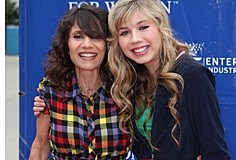 "There are people who believe that young actors on a TV series have it easy and that they never have a tough moment in their lives," Jennette writes in a story for the Wall Street Journal. "You may be surprised to know that some of us actually do have to face some tribulations."

After her initial Stage IV mammary ductal cell carcinoma diagnosis in March 1995, Jennette's mom underwent a required a bone marrow transplant, chemotherapy, breast surgery and many radiation sessions. Despite a bleak survival expectancy, she defeated the late-stage disease to the surprise of doctors.

"Her doctors said it defied their understanding of medicine. Of course, our entire family was relieved and grateful beyond measure," Jennette recalls, despite only being two years old at the time. "However, as any cancer survivor knows, every check-up after recovery is a nerve-racking experience. Every time the results came back clear, a sense of reprieve washed over us all."

The young star's article not only disproved the notion of her carefree life, but also revealed the unpredictable nature of the disease. On her mother's relapse, Jennette writes, "When she finally reached the 15 year cancer-free mark, I doubt it crossed any of our minds that her cancer would return. But it did.

"In February 2010, my mother had sinus surgery and her doctors found breast cancer cells in her sinuses," Jennette continues. "After several scans, they also found cancer in her skull, lymph nodes, ribs, sternum, thoracic and lumbar spine and pelvis. And just a few weeks ago, they found cancer in my mother's brain and she has started another round of chemotherapy for the cancer in the rest of her body."

Just as her newest single, 'Generation Love,' began to climb the charts, the singer was forced to cancel all scheduled appearances to be with her mother.

"She can barely stand, yet she gets up before me in the morning so that she can make me a mug of hot chocolate," the proud daughter reveals. "I don't know how she does it, but she claims it's what makes her happy."

According to www.breastcancer.org, one in every eight women will develop invasive breast cancer over the course of their lifetime. Click here to learn about risk factors and screening procedures.