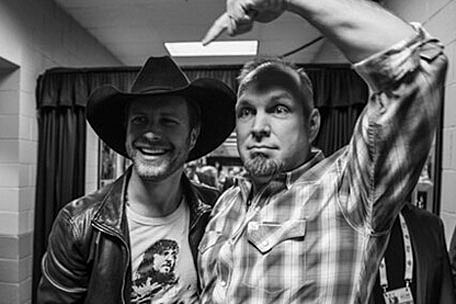 While most fans watched the ACM Awards from their couches, they were treated to a little behind-the-scenes action live from Las Vegas, thanks to Twitter.

Several of our favorite country stars were quite active on social media Sunday night (April 7), sharing their excitement, funny anecdotes and a few candid photos. We've compiled a few of our favorite #ACMs tweets:

Dierks Bentley was overwhelmed after the show when he met Garth Brooks, tweeting the above pic and writing, "I am a FAN of country music 1st, artist 2nd. And there is no feeling in the world like meeting a hero."

Kelly Clarkson shared that sentiment when she found out that Trisha Yearwood would be introducing her performance, posting, "So I'm about to rehearse on stage for the ACM's tonight and all of a sudden I find out Trisha freaking Yearwood is introducing me and I act like a total kid and freak out and am grinning from ear to ear and so flustered ....and THEN I go off stage and am still flustered and run right into George freaking Strait and he's sweet as can be and THEN I turn around and Garth Brooks is talking to me .....HOLY WORD I SHOULDN'T SAY ON TWITTER .....BEST DAY EVER!!!!!"

Sheryl Crow also found herself in awe of the celebrities in attendance, admitting, "I saw @williebosshog from #DuckDynasty and I was too star struck to say hi! My son will kill me!"

Reba McEntire may have given up her co-hosting slot, but she didn't miss the chance to mess with her former co-hort Blake Shelton, tweeting a photo of herself taking over his dressing room and writing, "And @blakeshelton thought this was his dressing room. Ha!!"

Newly crowned Entertainer of the Year Luke Bryan shared his appreciation for the fan-voted title with his followers, writing, "Dear everyone. Just got back to my phone. What happened tonight was truly incredible. I have no words to describe my feelings."

"WHAT IS GOING ON! duo of the year again. this one is for the squares!!! love y'all!" Thompson Square shared after taking home their trophy.

Vocal Group of the Year winners Little Big Town also expressed their gratitude, writing, "We are blown away! What an amazing night. We love our fans so much."

Blake Shelton was a little too busy to tweet during the show, given he was co-hosting and performed three times. But just before the show, he posted, "I'm so excited about the ACM awards I just pee'd in a water balloon and threw it at Kenny Chesney!!!!!"

Flip Through Photos From the ACM Awards

Go Backstage at the ACM Awards