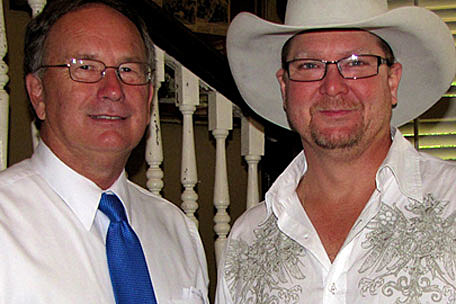 Tracy Lawrence is known among country music fans, not only for his successful music career, but also for his generosity. The 44-year-old singer, whose lengthy list of philanthropic efforts include his annual Turkey Fry for the Nashville Rescue Mission and his Tracy Lawrence Golf & Concert for a Cure, which raises money for breast cancer awareness, is now being honored for his charitable efforts.

"Tracy has such a giving spirit," says Lebanon, Tenn., Mayor Philip Craighead (pictured above with Tracy.) "He serves as an inspiration not only to others, but the community as a whole. He has stepped up to the plate to help those in need, time and time again. His involvement with various local charities in Lebanon and throughout Tennessee, prove him deserving of being designated as the Wilson County Humanitarian. It is with utmost respect that we proclaim Sept. 25 as 'Tracy Lawrence Day' in Wilson County."

The event is open to the public, and will benefit New Leash on Life, which is dedicated to assisting stray and abused animals. The evening will include entertainment, dinner and an auction. Tickets can be purchased by calling 615-364-9082.

Tracy just wrapped filming his first movie role, for the upcoming "L.A. Dirt," which is about a young man's dream of pursuing a career as a professional dirt bike racer. The "Time Marches On" singer will play the role of Uncle Charlie in the film.

"The whole experience was very similar to shooting music videos," Tracy tells The Boot. "I hope to get a chance act in more movies in the future. I believe I will get better with more I do."

The country star will also spend much of the next few months on the road, including a show tonight (August 17) in South Carolina. Keep track of his show dates here.