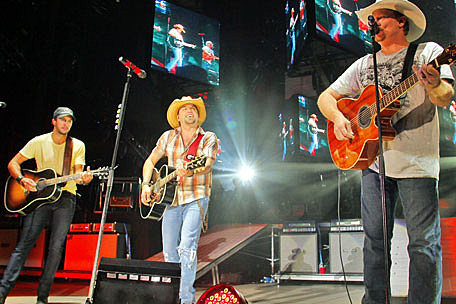 For the past few months, My Kinda Tour headliner Jason Aldean has been inviting his tourmate, Luke Bryan, out on stage to cover Tracy Lawrence's No. 1 hit "Time Marches On." However, fans last night (May 17) in Birmingham, Ala., got a special surprise when Tracy himself appeared to perform the song with Jason and Luke.

Tracy stayed on stage with the pair for 20-minutes, playing three songs total. The next was the Arkansas native's debut single and first No. 1, "Sticks and Stones," followed by his 2003 hit -- which was more than appropriate for the venue -- "Paint Me a Birmingham."

This appearance has been a long time coming. Jason has been using a section of his set to perform covers, and during his February stop in Nashville, he revealed that he'd hope to surprise the crowd then.

"We want to use this time to pay tribute to some of the singers that we grew up listening to and who influenced us," Jason said. "I wanted to have Tracy Lawrence come out tonight but he was out of town."

The stars (maybe over Texas?) aligned, though, and Birmingham fans reaped the benefits. The 'Party' continues tonight (May 18) in Atlanta. Get a full list of Jason's concert dates here.

Jason Talks About the Moment He Knew He'd 'Made It'