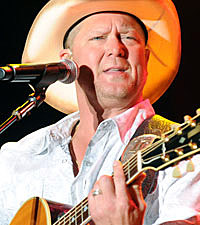 Tracy Lawrence, who is currently on tour in California, awoke to an unpleasant surprise Monday morning (April 16). The singer and his road crew discovered that an equipment trailer carrying their music gear had been broken into and several items reportedly stolen. According to a statement from Tracy's publicist, the burglary occurred at 4:22 AM PST.

With a series of shows scheduled over the next few days, several music companies came to the rescue to help replace the stolen items. Robert Keeley of Keeley Electronics jumped on board by donating replacement gear for a guitar rig, while others shipped equipment in time for the next gig, including Howard Jones at Digital Console Rental; Jamie Jackson from Sam Ash Music in Indianapolis Ind.; Jason Goldin of Sam Ash Music in Glendale Ariz. and Matt Adams of Sweetwater.

Luckily for everyone, the incident didn't pose any physical threat but it may have brought back memories of a much scarier, more life-threatening situation Tracy faced in 1991, just as his music career was taking off. In May of that year, Tracy was walking his then-girlfriend to her hotel room in Nashville when the two were mugged at gunpoint. In an effort to allow his girlfriend to escape, Tracy fought back, only to be shot four times. While two of the bullets merely grazed him, one had to be surgically removed from his knee, and the other remained embedded in his pelvis.

In spite of the recent setback, Tracy will continue his California trek with shows in Bakersfield (Thurs., April 19), Nice (Fri., Apr. 20) and Red Bluff (Sat., April 21).