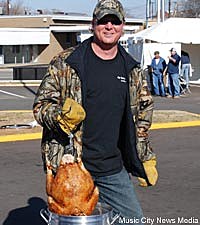 Tracy Lawrence will host his 4th Annual Mission Possible Turkey Fry event on Tuesday, Nov. 24. He'll be joined by several special guests, yet to be announced. The singer organized the event, which takes place just before the Thanksgiving holiday, in support of the Nashville Mission. Since the event's inception, Tracy and his friends in music have donated more than 4,000 turkeys and meals valued at $84,000. Thus far, the event has raised more than $100,000 for the mission.

"My job at home during the holidays is to deep-fry all of the turkeys for our gatherings," says Tracy. "I decided that I could take something that I enjoy doing and turn it into an awareness campaign for the Mission. My experience in getting to know the works of the Nashville Rescue Mission made me want to help. It made me want to work to increase public awareness of the Mission and to support its efforts and those of its workers and its volunteers."

Tracy is currently focusing on songwriting, with plans to release an album of his own material in late 2010.