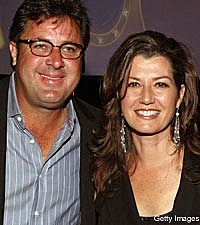 Vince Gill and Amy Grant, married now for ten blissful years, are somewhat of a case of opposites attract.

"Amy and I have had very different upbringings," Vince shared at a recent gathering at Belmont University in Nashville, Tenn. "She played mostly in churches on Wednesday nights and Sundays, and I played mostly in the beer joints. Come to find out 35-40 years later that we were playing to the same people."

longevity is rare. Vince and Amy agree that it's their job to keep impressing those fans with new music ... because fame can only get you so far. "Longevity is based on a lot of things, but it's greatness that keeps people like James Taylor or Bonnie Raitt sticking around for 30 years," Vince says. "I know firsthand that there are people parking my car who can play me under the table."

Amy echoes her husband's sentiment. "Gracious on the way up, gracious on the way down" is a motto she lives by, adding that she isn't bothered by the fact that her career has already reached its pinnacle. "When you love music, you just do it whenever you can ... Music shouldn't be exclusive."

"If you can let go of the results, you'll find great peace in your music," Vince adds. "Whether it sells 10 million copies or ten, none of the notes have changed. I'm willing to let music be in the moment."

Both profoundly grateful for their immense success, including platinum albums, No.1 hits and dozens of awards between the two of them, Amy says most of their achievements happened without any planning or foresight. "I tell my kids that when you experience the Great Other reaching toward you, don't miss the chance to respond," she reflects. "Years ago I realized that the best things in my life happened outside my plan. Maker of the Universe, feel free to inject your creativity into my plan."

Amy recently released 'Somewhere Down the Road,' while Vince, who celebrates his 53rd birthday today (April 12), is enjoying some time on the road this spring, touring in support of his latest album, 'Love Songs.'