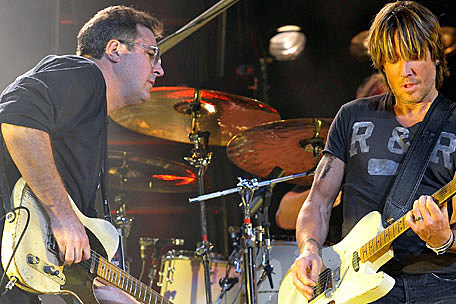 People seem to quibble quite a bit about what constitutes country music, but no matter your definition, it was represented in Nashville Tuesday night (April 16). We're All for the Hall 2013, co-hosted by Keith Urban and Vince Gill, welcomed a variety of country music up-and-comers and icons to the Bridgestone Arena stage to raise money for the Country Music Hall of Fame and Museum.

Keith kicked off the night, dedicating his No. 1 hit "Without You" to his wife Nicole Kidman and daughter Sunday, who were both in attendance. Vince followed, playing his version of the Marshall Tucker Band's "Can't You See" for the sell-out crowd of more than 13,000. The pair remained on stage, playing with the backup band for all of the night's guests -- who epitomized the show's "Rebels and Renegades" theme -- including Willie Nelson, Kris Kristofferson, Jason Aldean, Tim McGraw, Eric Church, Trace Adkins, Hank Williams, Jr., Kid Rock, Sheryl Crow, Brantley Gilbert, Montgomery Gentry, Rosanne Cash, Jessi Colter and Billy Joe Shaver.

See photos from both onstage and backstage below.

Flip Through Photos From All for the Hall 2013

"It's my way of saying thank you to the genre," Keith, who has organized the concert for four years now, told The Boot at rehearsals. "I grew up in the genre. In some ways, it was a bit of a subculture in Australia, but a subculture that I was a part of and raised in. My whole childhood was spent traveling to different countries and festivals, and competing in these festivals. I was hanging out with kids whose parents had joined these country music clubs, like my parents had joined country music clubs, so it was my whole life. And then to come to Nashville and have the life I've been able to have here, is such a blessing. I was looking for a way I could say thank you."

The show was expected to earn the Hall of Fame half a million dollars. From country classics to obscure rock tunes, it was filled with musical fun and history. Fans heard "Me and Bobby McGee" and "On the Road Again" from the legends who made them famous (Kristofferson and Nelson, respectively). Eric Church covered The Band's "Ophelia" and Jim Ford's "Big Mouth USA," and Rosanne Cash took on "Long Black Veil" and "Seven Year Ache."

Jason Aldean and Tim McGraw stuck to their hits, with the Georgia boy playing his "Take A Little Ride" and "My Kinda Party," and the Louisiana man offering "Real Good Man" and "How Bad Do you Want It." Kid Rock joined Sheryl Crow for the crowd favorite "Picture" and everyone took the stage to close the show with Hank Jr.'s "Family Tradition."