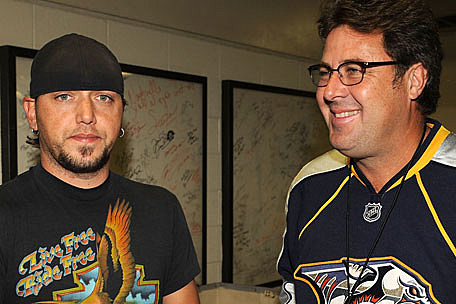 When you've got a concert event titled "Rebels and Renegades: the Outlaws Are IN," you'd expect such iconic artists as Willie Nelson, Billy Joe Shaver and Kris Kristofferson to take the stage.

And although Tuesday night's We're All for the Hall concert at Nashville's Bridgestone Arena featured those legends, a handful of contemporary artists who could also arguably wear the outlaw title, were also on hand. Vince Gill, who co-hosted the fourth annual fundraiser for the Country Music Hall of Fame and Museum with Keith Urban, may not have the appearance of an outlaw, when measured against Willie, Kris and the like, but has still brought something of a rebellious spirit to country music.

"I'm not much of an outlaw," Vince tells The Boot. "I don't sing like one and I would not be considered one because I'm very community-minded and helpful and a philanthropist; a cheerful giver of sorts. But there are times where I'm fairly well-known for my staunch support of traditional country music. In today's world, that would be an outlaw in a heartbeat. I've kind of always done things the way I liked them. It doesn't have to be rough around the edges or tough, or all those things that most people would kind of perceived as being outlaw-ish."

One of modern country music's artists who was schooled in the outlaw tradition is Jason Aldean, whose renegade ways have led him to collaborate with such unexpected artists as hip-hop superstar Ludacris, on a remix version of "Dirt Road Anthem.

"The type of music that I play is different, it's a lot edgier than a lot of the things on country radio," Jason reasons. "I've gone out and done things my own way but I don't necessarily know if that's being an outlaw or if that's just being a smart business guy. People are going to label it whatever they want but that's the way that Willie and those guys did it back in their day, and I just always had a ton of respect for those guys."