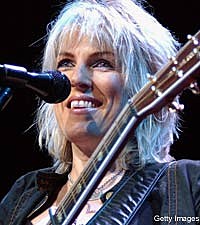 Lucinda Williams will give the performance of a lifetime next week, when she marries her longtime boyfriend and current manager, Tom Overby, during a concert! Following in the footsteps of her hero, Hank Williams (no relation) who wed his second wife on stage in front of an audience of thousands, Lucinda and Tom will say their vows between the end of her regular set and before her encore.

The nuptials will take place Sept. 18 at First Avenue Nightclub in Minneapolis, the Star Tribune reports. The club has already hosted countless memories for Lucinda, including a live Internet broadcast, dozens of performances and a frequent place of respite during the recording of her 2001 album, 'Essence.' The couple, who reside in Los Angeles, spend much of their free time visiting Tom's friends and family in the city.

"We're really excited about it," says club manager Nate Kranz. "We've had a lot of awesome shows with Lucinda over the years, but this one will probably be the most memorable."

Adding to the importance of the event, the concert is also a celebration of Lucinda's 30 years in the music business, and serves as the kick-off to a packed month of touring, including 3-night gigs in New York and Chicago.