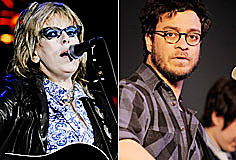 Lucinda Williams and Amos Lee will hit the road together this July for nine co-headlining tour dates. The two recently collaborated on the tune 'Clear Blue Eyes,' which can be found on Amos' 'Mission Bell' album, released earlier this year.

"There were a couple songs where we wanted to have some other voices," Amos tells The Boot about the CD, which also includes Willie Nelson. "On the last record, I didn't have any other people singing on it with me. I never had anybody take a verse on one of my songs and we were thinking of people that would sing the songs well and represent them well. We just put it out there to go to the people who we love and respect the art that they make and the way they approach their careers. We were very fortunate to get everybody."

Both artists will be touring between now and July. Lucinda has solo dates beginning April 21 in Indianapolis, Ind. through May 14 in Aspen, Colo. Additionally, Amos hits the road April 22 in Raleigh, N.C. and continues through May with artists such as Sonia Leigh and the Watson Twins.

Lucinda is currently supporting her latest project, 'Blessed,' which was released March. The singer-songwriter approached this CD differently straight from the get-go.

"These were all written in the same time period," Lucinda tells The Boot. "I probably started the writing cycle in April or May of last year and then just kept going until we went in the studio, which would have been July. When I sit down to write like that, I have a folder of verses and lines and interesting phrases. I get all of that stuff out so some of the songs are from seeds that may have been placed a few years ago."

Find Amos' and the co-headlining tour dates may be found here, with more info regarding Lucinda's solo shows here.