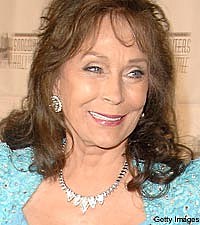 In 1960, Loretta Lynn and her husband, Dolittle, worked tirelessly to earn her first hit single -- 'I'm a Honky Tonk Girl' -- by driving around the country in their car, visiting radio stations. Fifty years later, Loretta is still doing that. But these days, she gets to pick and choose when, where, and how often.

"I don't have to work, so I work when I want to," the country music icon tells the Birmingham News. "I stay home and it bothers me ... but I have it good on the road now, not like when I started."

Indeed, Loretta's ride in 2009 is definitely more cushy and tricked-out than the cramped automobile she was chugging around the country in fifty years ago. "I have my bus fixed up just like a home, with five TVs in it," the Coal Miner's Daughter reveals. "There's a complete kitchen, a complete bathroom and a half-bathroom. It's all my own."

As are the 160 songs Loretta has written over the course of her storied career for 70 albums. Ten of those albums reached No. 1, including 2004's critically-acclaimed 'Van Lear Rose,' for which she wrote or co-wrote every song. Loretta's tireless work as a writer the past 50 years earned her induction into the Songwriters Hall of Fame last year, and she's been a member of the Nashville Songwriters Hall of Fame since 1983.

Today, Loretta is hard at work on the follow-up to 'Van Lear Rose,' and has been co-writing with Shawn Camp. And as is her work ethic, she's making sure every song she writes undergoes numerous drafts before it reaches the public. "I write things, throw it out, and put it in the garbage can," Loretta reveals. "Sometimes I drag it out again."

Besides working on her new CD, Loretta is also re-recording many of her earlier hits. And if that isn't a heavy enough work load for the 74-year-old, she's also working on a gospel album.