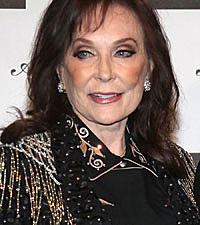 Loretta Lynn will be celebrated on Tuesday, Sept. 25, with a star-studded tribute commemorating the iconic entertainer's 50th anniversary as a member of the Grand Ole Opry.

Among the artists scheduled to join Loretta on the Opry stage are her sister Crystal Gayle, along with Miranda Lambert, Lee Ann Womack, Trace Adkins and Pistol Annies, who will make their Opry debut that night.

Loretta, 80, joined the Opry family on Sept. 25, 1962. The three-time Grammy winner also has eight CMA awards to her credit and in 1972 was the first female artist to be crowned CMA Entertainer of the Year. A member of the Country Music and Songwriters Halls of Fame, the Kentucky-born singer-songwriter earned the Grammy Lifetime Achievement Award in 2010.

"There is no one at the Opry, in country music, or on Earth quite like Loretta Lynn," said Pete Fisher, Grand Ole Opry vice president and general manager. "Her influence as a recording artist and songwriter reaches across musical genres, cultures and generations. She's earned her place among America's musical icons and we look forward to celebrating 50 years of Opry membership with her next month."

Since then, of course, she has gone on to become one of the most recognizable figures in country music and in popular culture. In 1980, her life story, "Coal Miner's Daughter," which is also the title of one of her signature songs, was a box-office smash and earned Sissy Spacek an Academy Award for her portrayal of the young star.

The Grand Ole Opry, which first went on the air Nov. 28, 1925, is held every weekend of the year, with Tuesday Night Opry performances continuing through Dec. 11. To plan an Opry visit, call (800) SEE-OPRY or visit www.opry.com.

Loretta, who recently hinted at several new recording projects, and will be the subject of an upcoming Broadway musical with actress Zooey Deschanel in the lead role, is scheduled to perform on Friday (Aug. 31) at her ranch in Hurrican Mills, Tenn. See more of her tour schedule here.