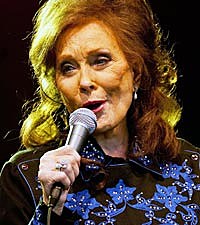 The legendary Loretta Lynn has been forced to cancel her July 17 performance at Jamboree in the Hills, an annual four-day country music extravaganza held in Belmont, Ohio. The 76-year-old singer cites extreme dehydration, following a period of extreme heat in her home state of Tennessee where the heat index reached upwards of 116 degrees earlier this week.

Loretta is quoted as saying she is saddened by the cancellation and was eager to see her fans. Country superstars Miranda Lambert, Tim McGraw and Toby Keith are still set to perform as scheduled.

Despite the Coal Miner's Daughter's cancellation, the Buckeye state still shows big love for the iconic entertainer. Loretta joins Taylor Swift, Faith Hill and Brenda Lee as honorees for the Rock and Roll Hall of Fame and Museum's upcoming 'Women Who Rock: Vision, Passion, Power' exhibit. The exhibit, which debuted in May and runs through February 2012, spotlights Loretta's controversial hit, 'The Pill,' in its 'Revolution, the Counterculture and the Pill: The Late 1960s' section. It also features the singer's pink gown from the 'Portland, Oregon' video, picture sleeves from the singer's historic records 'Back to the Country,' 'Coal Miner's Daughter' and 'Don't Come Home a Drinkin', and an Epiphone Hummingbird Loretta Lynn model guitar.

The museum describes the current exhibit as "flashpoints, the firsts, the best, the celebrated -- and sometimes lesser-know women -- who moved rock and roll music and American culture forward." It features more than 70 artists and encompasses two entire floors of the venue with artifacts, video and listening stations. Click here to learn more about exhibit.

Loretta is scheduled to return to Ohio on August 2 for the annual state fair. Click here to view the singer's entire concert schedule.