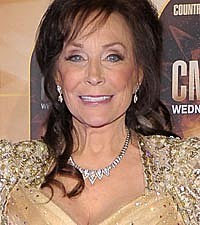 Loretta Lynn has recorded more than 50 albums since her debut single, "I'm a Honky Tonk Girl," hit the airwaves in 1960. But while it may seem that the 80-year-old would be ready to relax in her rocking chair, she admits there's plenty more she hopes to accomplish before she considers retirement.

"I want to have more hits," the legend tells the Atlanta Journal-Constitution. "Giving up is for quitters! No one says anything anymore [in songs]. They need me out there."

The Kentucky native already has several projects in the works, including an album with a fellow country icon. "Me and Merle Haggard are going to do a record," Loretta reveals. "He hasn't lost one note of his voice. I want to record a song with him that he wrote, 'Today I Started Loving You Again.'"

The Grand Ole Opry member, who has been sidelined in the past few years by both knee surgery and illness, has nevertheless stayed active in the recording studio. "I've got 60-something things cut already," she explains. "I've got a Christmas album, two religious albums. I'm gonna put 'em out and get 'em on the radio."

She also continues to perform as much as possible, in spite of her recent ailments. "It's just one of them things. When somebody needs you, you just go," she reasons.

While her extensive repertoire includes almost 90 singles, Loretta knows that her loyal fans always expect her to perform her signature tune.

"You have to do 'Coal Miner's Daughter,'" she says. "They're hollering right off the bat for that one. I tell 'em, 'Just wait a minute!' Not everything I've recorded has been a hit, and you just get to where you do some songs because [the audience] is gonna make you do them. They paid their admission."

Loretta concedes the music scene has changed since she first began making records, but adds that she doesn't mind the evolution. "Country today is like pop music was 40 years ago, that's the way I see it. But I don't think it's a bad thing. I like the polished sound of country, even though I'm as country as cornbread."

In addition to working on her new albums, Loretta will also see her life portrayed in an upcoming Broadway musical, "Coal Miner's Daughter," with actress Zooey Deschanel in the lead role.

The Country Music Hall of Fame member will play in Atlanta Friday night (Aug. 24), followed by shows in Tennessee and Canada. See her tour schedule here.