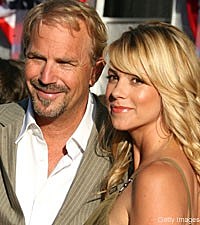 The 54-year-old Costner, whose oldest child is 24, says fatherhood the second time around isn't much different.

"I know guys who've started a second family, and sometimes they talk in terms of, 'I didn't realize how much I missed.' I thank God that I don't have to say that," Costner told The Boot in our exclusive interview. "The first time around, I didn't busy myself with my career so much that I missed their growing up. I went to all their plays, all their games ... And doing it the second time, I wondered, 'Can I give it the same energy as the first?' I don't have anything to feel bad about, looking back. I just love their lives."

The name Hayes comes from an upcoming Western movie Costner is working on. The actor/singers tells the Associated Press that Hayes is "a cowboy character" and "a great Western name." Costner is undoubtedly a fan of all things Western, as he also fronts the country-rock band Kevin Costner and Modern West.