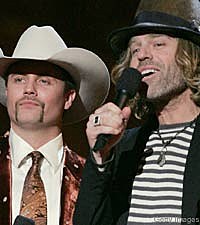 Big Kenny and John Rich will donate $10 from every ticket sold for their Aug. 25 show in Edmonton, Alberta, to the Donna Moore Memorial Trust Fund, reports Countryschatter.com. The 35-year-old from the city of Lloydminster was the mother of two sons, ages 10 and 16.

"We were immediately struck by the sadness of what happened at Big Valley," says John. "We have stood on that stage with other artists and fans, and the news really hit home with us. We immediately knew we needed to do something, so we invite all music fans to join us at Telus Field for a great evening and an opportunity to contribute to the fund in support of Donna Moore's children."

Kevin Costner and Modern West were preparing to take the stage following Billy Currington's performance, when strong winds caused the stage to collapse. Moore was crushed and killed by large speakers tumbling from the stage as the storm hit.

As a way of donating to the memorial fund, Costner announced he will auction himself off as a dinner date to the highest bidder. Following the tragedy he issued a statement saying he hopes to return to Alberta "to help with the healing."