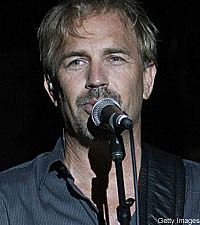 Costner first met Modern West band mate John Coinman in Los Angeles 20 years ago during an acting workshop. The two began playing and writing music together in a band called Roving Boy. Preoccupied by his movie career, which has included such films as 'Dances with Wolves' and 'Field of Dreams,' Costner didn't have much time to devote the band, although he and some of the members continued collaborating behind-the-scenes -- playing, writing, and recording any time they could.

A musical performance in August 2005 proved to be a turning point for Costner, who says, "I remember looking out into the crowd, thinking 'this just feels right.'"

The result of that renewed passion is an album of 12 original tunes, all written or co-written by Kevin Costner and Modern West (John Coinman, Blair Forward, Teddy Morgan, Larry Cobb and Park Chisolm).

'Untold Truths' will be released November 11 on Universal Republic/Universal Records South. One of the album's tracks, 'Long Hot Night' is now available for download at digital outlets. The band is scheduled to tour later this year and into early 2009.