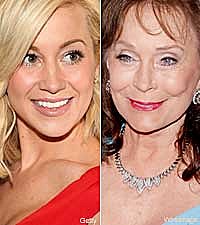 Another of Kellie Pickler's childhood dreams came true last Friday when she discovered she was sharing the bill of Canada's Havelock Country Jamboree with the legendary Loretta Lynn, whom she'd never met.

A lifelong fan, Kellie spent time before the show on Loretta's bus. She tells The Boot that the meeting was everything she could have hoped for. "She's so personable, and so real! I think it's really cool when you meet someone you're a fan of, especially when you've followed their career and bought their records, and had their posters on your wall and worn their t-shirts."

Kellie received a special souvenir of the visit - albeit a temporary one. "She kissed me on the cheek! She wears the same color lipstick as my grandma did. I left her kiss print on my cheek for my show," Kellie says with a giggle. "I didn't wash my face for days!"

By comparison to Loretta's four decades in country music, Kellie is a relative newbie to the business, and she took advantage of the opportunity to learn from the Country Music Hall of Famer. "Being able to sit on the side of the stage and watch Loretta's show, I just learned so much. It's not about all the bells and whistles, it's just her, and her band, and her songs," Kellie says.