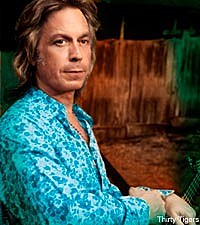 Jim Lauderdale is right at home on multiple stages, whether at MerleFest performing with Elvis Costello or on 'The Late Show With David Letterman' as part of Willie Nelson's band. The two-time Grammy winner, who hails from Troutman, N.C., has written hits for George Strait, Patty Loveless and the Dixie Chicks, and been named Artist of the Year by the Americana Music Association. Almost two decades after releasing his debut album (1991's 'Planet of Love'), Jim is releasing album No. 18 this week, 'Patchwork River' -- a collaboration with songwriter Robert Hunter, who wrote numerous hits for the Grateful Dead.

Robert was a friend of the Dead's Jerry Garcia, and while it might sound like a stretch for him to collaborate with Jim, it should be noted that Robert and Jerry were both in bluegrass bands (try the Tub Thumpers for a start) in the 1960s. The first collaboration between Robert and Jim appeared on the 2002 release, 'Hummingbirds,' a gospel-tinged tune titled 'Jacob's Ladder.' Robert recalls that Jim sent him a letter that he perceived to be from the heart, about writing a song. He told the songwriter to send him a tape ... Robert liked what he heard, and sent back the lyrics to 'Jacob's Ladder.'

'Patchwork River' is a true collaboration, in which Jim wrote the music and Robert the lyrics. The 13-song disc was written over a span of three years and recorded with some of the top musicians Jim could find, among them Americana darling Patty Griffin, guitarist James Burton (Emmylou Harris, John Denver), drummer Ron Tutt (Elvis Presley, Jerry Garcia), and steel and dobro wizard Al Perkins (Rolling Stones, Flying Burrito Brothers).

The Boot talked with Jim about his work with Robert Hunter, the new album and how he ended a decade-long "dry spell" with George Strait.

How did you and Robert meet?

After I recorded 'Jacob's Ladder,' Robert came to Nashville and we met and wrote a bunch of songs together. We were going to do a whole album of our songs and then I got sidetracked on a couple other projects. So we had not written for about six years, and I went out to California and called him and we started writing again ... I like to do these dream projects, working with different musicians and writers. I was gonna be doing a record with this band I had put together called the Dream Players, a bunch of them had been on Gram Parson's album and several in Elvis [Presley]'s band when he made his comeback. So they are on about four of these songs on the album.

Then some time went by and I went back to California and we wrote another batch of songs and I recorded those with some other studio guys, including Kenny Vaughan and Chad Cromwell. Then I went back one more time, last May, and we wrote one more batch of about six songs and I used three on this record. I did those at Patty Griffin's studio in East Nashville. So we did this over a three year time frame. I love Robert's writing; his lyrics to me are so different, and something I could never come up with.

You call Robert Hunter a "world-class genius" – what do you mean by that?

For my album 'Headed for the Hills,' I gave him a melody and went away for a a day and he had written this song called 'Trashcan Tomcat,' about a cat, but as if the cat was a person. His ideas, they are just beyond what I can do. There's an old song called 'Knoxville Girl,' that the Louvin Brothers made popular. He took my melody and made this story about the guy who could be singing 'Knoxville Girl,' and I'm thinking, "Who would think of something like that?"

Then there's this other song, 'Turn to Stone,' that's a country, Cajun-type song. He came up with the idea of when the singer is a kid, he thought this old woman who lived in the neighborhood could turn people to stone, and then he turns that around to how the woman he falls in love with can turn him to stone.

A few weeks ago, I got in touch with him because Ralph Stanley was looking for some gospel stuff. He sent me three great lyrics in a 24-hour period! They're great gospel songs the Stanley Brothers could have done. He's really got a wide range of skills that can take on so many different styles. He's one of the all time great lyricists.

I was in the studio working with Odie Blackmon, and we had some time so I thought hey, let's throw down this new one I wrote with Robert Hunter, 'Patchwork River.' t's kind of in some ways a departure for me, because my records are usually fairly eclectic, either straight-ahead country or bluegrass. I feel like this is a little different for me, a mixture of a lot of stuff. 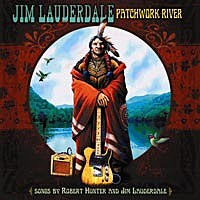 And how did you decide to title the album 'Patchwork River'?

Where do the melodies come from that you write?

I think it's different for every writer. I'm real thankful for how it works. A melody will just pop up. If I'm writing with Robert, I might be sitting there playing the guitar, or maybe I'll pick up my guitar after a melody pops into my head. I'll just sing it and when I get Robert a tape of what I've done, he'll write exactly to that structure that I've given him. I hear it in my head like it's the whole song. I'm humming the vocal melody line, then sometimes at the same time I'm hearing a certain instrumental.

You just finished touring with Elvis Costello; any collaborations with him?

We finished another record that will be out in the fall. Then I got to be on Willie Nelson's new record, he's such a hero of mine. I've been so lucky, from working with Ralph Stanley to getting to do duet with George Jones. He was such a favorite of mine and still is, so that was really cool to get to do that. I've been so lucky to work with some of my heroes.

It's funny, the music business has a lot of ups and downs. I started out trying to get a bluegrass record deal and could not get one. Finally I did get a country record deal and then it's just kind of gone on from there. Sometimes there are so many doors that close, and then it's really sweet when something good happens. I was so happy this year to have 'Twang' and now the George Strait single 'I Gotta Get to You,' which I wrote with Blaine Larsen and Jimmy Ritchey. It had been ten years since I had a single with George, so that was nice ... looks like the dry spell has ended!