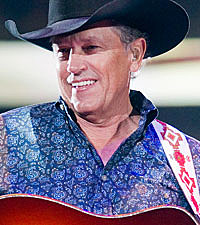 Just about two months ago, George Strait stunned fans with the bittersweet news that his next tour will be his last. But while the King of Country is parking his tour bus after the 2013-2014 Cowboy Rides Away tour, he plans to keep a recording schedule that's busier than most artists half his age.

"I'm still going to try and make a record every year," insists the 60-year-old country legend. "I'm feeling a little antsy about getting back in the studio."

The first taste of George's upcoming 40th studio album is the mid-tempo love song, "Give It All We Got Tonight," which was released to radio last month. The Texas troubadour is now writing songs to join the current single on his new record, collaborating once again with Dean Dillon ("The Chair," "Ocean Front Property") and his son, Bubba Strait ("Living for the Night," "Here for a Good Time").

"I've got some great material already. I'm working on some songs and some original stuff too," the singer reports. "I've been doing a little bit of writing, but I need to do a little more. I've scheduled some time during the tour to write with Dean and Bubba."

The Cowboy Rides Away tour, also featuring Martina McBride, kicks off Jan. 18, 2013, in Lubbock, Texas. See a list of dates and more information on the trek here.