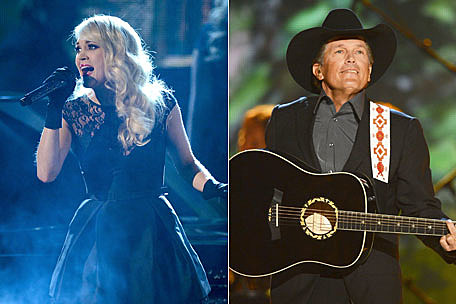 The 2013 CMT Music Awards will feature performances from Carrie Underwood, George Strait, Jason Aldean, Keith Urban and more. Seven new artists were announced on Tuesday, one week after Taylor Swift, Hunter Hayes and Pistol Annies were named on the initial list of artists to perform during the June 5 broadcast from Nashville.

Darius Rucker, Florida Georgia Line and Lady Antebellum will also play, as will Little Big Town and Luke Bryan. CMT made the announcement yesterday, adding the biggest names in country music to a show that unofficially begins the CMA Music Festival.

The 2013 CMT Music Awards air from the Nashville's Bridgestone Arena, in the heart of downtown Music City. Bryan, Eric Church and Miranda Lambert lead the way with four nominations each for the fan-voted awards show. All three are up for Video of the Year, along with nine other semi-finalists. When the show begins, six finalists will be named and fans can vote until the end of the broadcast to determine the winner.

Kristen Bell returns as host alongside first-timer Aldean. Toby Keith and Kid Rock have hosted the show in previous years. The broadcast begins at 8PM ET on CMT and CMT.com.