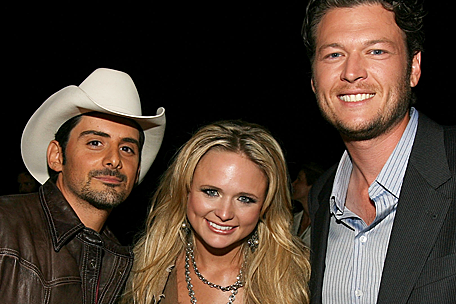 The ACM Awards telecast Sunday night (April 7) is shaping up to be a star-studded event, right from the show's opening number, which will be the live premiere of "Boys 'Round Here," the new single from ACM co-host Blake Shelton.

Don't forget, the only live televised coverage of the ACM Awards red carpet airs on GAC. "ACM Red Carpet Live" kicks off at 6:30 PM ET on Sunday, April 7, and runs until the ceremony's start at 8:00 PM ET.

Travis Tritt is set to sing the national anthem prior to the NCAA men's basketball national championship game April 8 in Atlanta. The appearance continues a long tradition for the Georgia native, who has already performed at two Super Bowls, a World Series game, the 1996 Atlanta Olympics, the opening of Atlanta's Georgia Dome and the final Braves game at Atlanta-Fulton County Stadium. On May 3, the singer plays the Barnstable Brown Gala at the Kentucky Derby, his 15th consecutive appearance at the benefit for diabetes research. Travis is also getting set to re-release his 10th studio album, The Storm, which features several new tracks, including a duet with his 15-year-old daughter Tyler Reese, on the Patty Smyth-Don Henley song "Sometimes Love Just Ain't Enough."

Brad Paisley, whose Wheelhouse album arrives Tuesday, April 9, has become the first country artist to ever cover Guitar World magazine. In the May issue of the publication, Brad details the different sounds on the new record and how they were achieved. The country superstar also covers the current issue of Country Weekly, detailing his love of cars, his work with the Live Beyond charity to help children in Haiti and how the artist he recently produced is a "jerk." (He's the producer of Wheelhouse). He's making the TV rounds next week, too. After Sunday night's ACM Awards, he'll be on the "Ellen DeGeneres Show" Tuesday (April 9), the "Tonight Show With Jay Leno" on Wednesday and "Good Morning America" on Friday, April 12.

Zac Brown Band and Jack Daniel's are giving away a restored 1954 Seeburg R Jukebox, filled with records selected by the band, at JackandZac.com. David Garnick of Lowell, Mass., restored the classic jukebox. This is the fourth and final prize to be given away on the band's tour. Other prizes that have been created include a snare drum crafted from Jack Daniel's whiskey barrel staves, a custom Taylor guitar, and a Zac Brown Band record with a shot of whiskey in its vinyl. [CMTT]