Carolyn Dawn Johnson has found two new loves to compete with her first love, music. The Canadian-born songbird has become a mother twice since releasing her last album, 2008's 'Love and Negotiation.' But somehow in between diaper duty and preparing for the birth of her second child, she found time to pour her heart and soul into new music for her fourth studio album, 'Love Rules,' released this month.

"Keeping up with being a writer and making a record and trying to be the best mom I could was tiring," she tells The Boot. "It was pretty tough, but when I got close to the end of [making this album] and all of the songs and the products were coming back all done, I got excited and emotional about it again."

A 13-track album consisting of 12 new songs, Carolyn Dawn says 'Love Rules' represents her best musical work yet. "I'm proud of it. I love the songs. I always say that the common thread is the writing, and that's still true with this record because you're going to hear my point of view one more time. This isn't a real personal album in the way that 'Room With a View' or 'Dress Rehearsal' or even 'Love and Negotiation' were, where I felt like they were really a stamp of my life at that moment. This was more of me putting songs that I love -- whether they're about me or not -- together for this collection because I have an idea of what my fans like and what I like."

Carolyn Dawn says, however, that a few of the songs on the new record are very personal to her. "There is a song on there called 'Bitterness' that has been hanging around for a while. It was really my song about the music business because I've had some heartbreaks through it. The song is basically saying I don't want to be bitter ... that is not who I am. I just want to get over this bitterness. That song is about me trying to get back to myself after having some hurt along the way."

One theme missing from the album, ironically enough, is motherhood, which has been new territory for the singer-songwriter. "So many people have asked me if there are songs about being a mother on there because this album was made during my time of being a mother and also being pregnant, but there's not," she says. "I personally don't gravitate toward that type of stuff. I really just gravitated toward songs that I love. Some of the stuff on there is probably going to be a little reminiscent of my first album with frustrations or whatever. Then there's some new stuff on there that I haven't tackled." 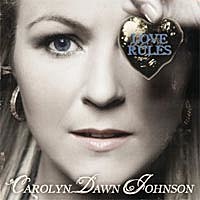 The first single from the album, 'Let Me Introduce Myself,' was released in Canada earlier this year. The follow-up single, 'The Whole Thing,' will hit country radio in the coming weeks. "I love that song," Carolyn Dawn says enthusiastically. "I think production-wise, it's one of my favorites. I am really proud of that song."

Carolyn Dawn produced the album, but as she got closer to finishing the project and further along with her pregnancy, she called upon Frank Rogers to lend a helping hand. "I was in the middle of being super pregnant, and I begged him to come track with me and finish the last few songs. He came in, and we had a blast doing it. He was a super-duper rock for me to lean on. He's funny and great and so musical. He is just so talented. It was just a blessing to have his touches on this record."

While there may not be any songs about her children on the album, Carolyn Dawn acknowledges both 23-month-old Abigail and six-and-a-half-month-old Bennett were in the studio with her. "Abigail would come visit me in the studio while I was recording, and, of course, I was pregnant with Bennett throughout the process of making this album. I have a little studio in the back of my property. I would go there to work, and the babysitter or my husband would bring Abigail out. She likes to get the headphones on and talk in the mic. I was working on the song 'Reach You,' and Abigail was singing along with it. I wanted to capture some of what she's doing so I started recording it.

"All of a sudden, the acoustic guitar solo came on, and she goes, 'All done.' It was just so perfect. I thought I would put it at the end of the record," says the proud mama. "I tried to get her to say it a bunch more times, but she never did it the same. I ended up keeping the original. It was the perfect reflection. So she finishes off the record."

Now that it's "all done," Carolyn Dawn can freely admit there was a time when she didn't know if she had it in her to complete the record. She has since found the perfect balance between career and family, which she says "rules" in her household.

"It's exciting to be out with some new music. I wasn't sure how I would feel about it. I thought that maybe I wouldn't care that much. I don't know why I thought that. I think because I was a new mother and I didn't know if anything else would matter anymore. Really nothing else matters besides your family, but I'm glad to know that I'm still passionate about the music. It's nice to know that that actually didn't go away."