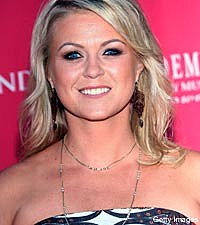 At the end of February, singer-songwriter Carolyn Dawn Johnson will give birth to her second baby who will join big sister, 16-month-old Abigail. And although she's not complaining, Carolyn says strangely enough, the second time has been harder than the first.

"I feel more tired [with this one]," Carolyn tells The Boot. "I've gained a few more pounds, and even though I haven't had any morning sickness with either, I've just been exhausted with this one. I also have had back issues that I didn't have with the first. You'd think it'd be easier this time around, but it really has been a little tougher -- could have something to do with the fact that I have a little one who needs a lot of attention!"

Carolyn has also been dealing with her fair share of cravings -- and a few things that completely turn her off lately.

"My biggest craving is milk. I could drink gallons!" she laughs. "I've also been craving grapefruit. I have a hard time eating chicken right now ... it's just so unappealing."

In addition to taking care of little Abigail and prepping for the new bundle of joy, she's been hard at work on a new album and doing some songwriting -- along with some crying.

"I have definitely been brought to tears many times while talking with my co-writers during the creation of certain songs," she reveals. "I also think at the same time I have a more matter-of-fact approach because I don't want to waste time writing things I just like. I feel like I want to love it, so I'm more prone to be a realist about what I'm working on. If it's just OK, I'm willing to let it go and strive even harder to reach for that special line or melody that moves me."