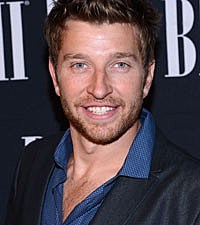 Country newcomer Brett Eldredge is working hard on his debut album, with its current single, "Don't Ya" already making a sexy splash at country radio.

Explaining the tune's lyrics, the singer-songwriter admits both men and women play games when it comes to dating ... but he's laying a little more of the blame on the ladies this time.

"I always wanted to write a song about how girls are very good at playing tricks on our minds," Brett tells CBS Local. "I'm sure we probably play tricks on their minds too, but they're way better at it. It's just the little things, just the brush of their hair, that always get us."

"Don't Ya" was released to radio in September, so Brett is now really fired up about making a music video for the song -- and he's especially looking forward to casting his leading lady! The singer's debut single, "Raymond" was an emotional tale inspired by his grandmother's struggle with Alzheimers, so "Don't Ya" offers him the chance to have a little more fun.

"That was my serious [video] now I get to make the fun video. Making a video for 'Don't Ya' is going to be a lot of fun. I get to draw up the sketch of how it's going to go. I get to be the director with the director," he said.

Watch CBS Local's interview with the rising star below, and download "Don't Ya" here.