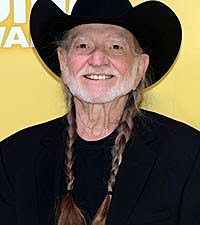 While most country stars are keeping mum about tomorrow's (Nov. 6) election, there are a few voicing their opinions. When it comes to country music and politics, though, it appears the few stars who are sharing their voices are doing so for the right, with the exception of Willie Nelson.

"I'm one of the undecided," he told CNN on Thursday (Nov. 1) before acknowledging his wife's protests to his comment. "She's an Obama gal," he said, gesturing towards his better half, Annie Nelson, who interjected, "He has a wife -- and four daughters -- he's an Obama guy."

"For the women, I think Obama is the guy," the music icon then conceded. "I really think [women's health care] is a big issue, and that's the one that I think Obama is on the right side of history. I think that will have a big influence on the election. I'll probably vote for him."

Willie went on to discuss the recovery efforts currently underway following massive destruction left by Hurricane Sandy. "He's really shown what a president is supposed to do with all the problems with weather that we're having on the East Coast," Willie explained, giving more props to President Obama. "He's acting very presidential. Nice to see him and Governor Christie coming together, and showing us what it's like when two people originally on opposite sides come together for the good of the country."

However, the "Roll Me Up and Smoke Me When I Die" singer is seemingly alone when it comes to country stars voicing their support for the Obama/Biden ticket ... at least publicly. Country singers who support Mitt Romney and Paul Ryan are still a small bunch, but far outweigh the number on the left side of the fence.

In August, Sara Evans admitted to E! Online that she thinks Ryan is good looking, though she insists aesthetics would never influence her vote. Still, the VP-hopeful probably does have his admirer's support tomorrow. "My tendency has always been to lean more conservative," Sara says. "I don't know that I can say I have [decided] for sure, but I'm leaning towards Romney."

John Rich and Big Kenny of Big & Rich performed at a Romney/Ryan rally in Ohio two weeks ago, while Rodney Atkins and Trace Adkins appeared at the Republican National Convention. And you'd have to live under a rock to not know who Hank Williams, Jr. is voting for -- or rather who he's not voting for.

While not entirely known for their country contributions, Kelly Clarkson and Kid Rock are also rocking the vote. Last month, the "Mr. Know It All" singer told Britain's Daily Star that she is probably going to vote for the president -- again -- even though she's a "Republican at heart."

"I can't support Romney's policies as I have a lot of gay friends and I don't think it's fair they can't get married," Kelly explained. "I'm not a hardcore feminist but we can't be going back to the 50s. Obama is a great guy. I've met him, and I'm a fan of Michelle too."

On the flip side, Kid Rock is playing a Romney/Ryan event tonight (Nov. 5) in Boston, before heading to Washington, D.C. for election day.

No matter which way you lean, The Boot urges you to get out and vote!