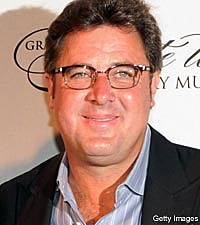 Master musician and prolific singer/songwriter Vince Gill remained his usual humble self as he was honored with the first ever Grammy Salute to Country Music this week.

"I was surprised there had not been a country artist before for this honor and then I thought, maybe Alison (Krauss) would have been a better choice because she has won more Grammys," Vince said, adding that he was nonetheless thrilled, but had no idea the celebration would be as elaborate as it turned out to be.

Brad, who was 11 years old the first time he met Vince, said he knew immediately that Vince was the kind of musician he aspired to be. "He is Mr. Country Music," the singer continued. "All during the '90s, if you wanted to know what country music was, you would just go pick up any Vince Gill album. He would be the singer, the guitar player and the songwriter, and that's what we are capable of in Nashville."

Vince returned Brad's compliments, saying, "He's studied all my films on how to be self-deprecating, and he's learned it in spades. He's a funny guy with a great sense of humor. I see a lot of similarities. I really value and love his work, and his ability to play."

Throughout the evening, the artists performed a number of Vince's memorable hits, including 'When I Call Your Name,' offered up by Michael McDonald, and 'Whenever You Come Around,' rendered beautifully by Alison. Despite his claims of nervousness at the prospect of performing one of the multi-Grammy winner's songs in front of him, Brad pulled off 'Trying to Get Over You' without a hitch. 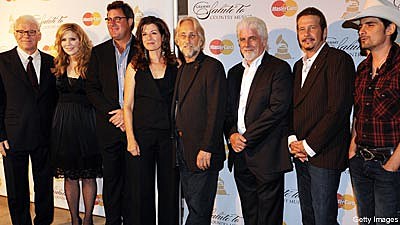 While offering a bit of personal insight into her husband, Amy probably didn't make any of the performers any less nervous when she told them, "Vince can't go to a concert without analyzing what's going on. You think he's not having a good time but that's just what he does." She also talked about Vince witnessing some of Alison's earliest performances at Nashville's fabled Station Inn. And in testament to how highly-regarded her other half is among fellow musicians of all genres, she related that Vince and Mrs. Elvis Costello -- Diana Krall -- have been friends for years, and recounted Vince's first meeting with one of his guitar heroes.

After his award presentation, Vince talked about being a poor, struggling musician, yet always embracing the moment. "I just put one foot in front of the other and kept playing. I didn't look ahead and wish for something else; I was content to be in the moment I was given."

Brad summed up the feelings of many of Vince's friends and fans by saying, "He's great at everything he does. He's one of the best golfers, a most fantastic musician, humanitarian, singer/songwriter and husband. He knows all the great places to eat in town. He's funny and charming and just the nicest guy to hang out with."