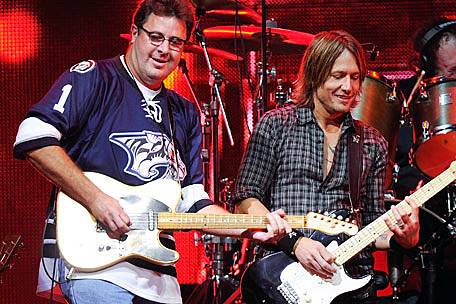 Stars will shine in Nashville tonight (April 16) to help fund a country music landmark. The 4th annual We're All For the Hall concert, which raises money for the Country Music Hall of Fame and Museum, will dazzle fans at Nashville's Bridgestone Arena. The event, which has raised more than $1.5 million for the iconic building in past years, brings in some of country music's biggest names for one performance-packed evening. Included in the lineup is the show's creator, Keith Urban, who says putting the night together is one of the most important jobs he has ever had.

"It's my way of saying thank you to the genre," Keith tells The Boot. "I grew up in the genre. In some ways, it was a bit of a subculture in Australia, but a subculture that I was a part of and raised in. My whole childhood was spent traveling to different countries and festivals, and competing in these festivals. I was hanging out with kids whose parents had joined these country music clubs, like my parents had joined country music clubs, so it was my whole life. And then to come to Nashville and have the life I've been able to have here, is such a blessing. I was looking for a way I could say thank you."

The "American Idol" judge says the Country Music Hall of Fame is important for past and future generations. "Right now with country moving so fast, you've got people who are influenced by Taylor Swift, so the influences are so recent," he explains. "It's really important that people remember that influences go back further than a decade."

Keith says the museum's contents and exhibits have only deepened his love for the genre. "I love the curating aspect. I love the museum aspect of it," he notes. "The first time I went was probably in '89. I remember old, original manuscripts of lyrics. That stuff I loved, where you could see lines crossed out of famous songs that we know so well, that could have had this line and it was crossed out. Guitars, of course, the costumes. I love all of the history, and how people got to work with one another."

While Keith puts a lot of work into the concert each year, the concept began with Vince Gill, who says the museum's role is vital to country music. "It's the most important piece of the puzzle, in that we all get caught up in today," he tells The Boot. "We get caught up in who's No. 1 on the charts, and who's selling all the records? Who's winning awards? It's great. It's the way it should be. For me, I have to know where all this came from. I have that lust and that love for, where did I learn this? It is from Jimmie Rodgers and the Carter Family, the first people who ever made records, in the '20s. The Opry, that has been there, 87 years, almost 88."

A Country Music Hall of Fame member himself, Vince appreciates that the museum pays homage to his own musical heroes. "Long before anyone had a hit record, and long before anybody sold out an arena, these people were plugging away playing music because they loved it. That's my mindset. It's that of a musician's. I've always just wanted to play. I never set my sights on being a star. I never set my sights on being an artist. I just want to play music with great musicians and see where it goes. Just get on the road and go see who winds up at the other end of the phone call."

Tim McGraw will take time away from his schedule, which includes the final Las Vegas concerts with his wife, Faith Hill, as well as rehearsing for his own tour, to perform for tonight's concert, but there isn't any place he'd rather be. "Not to take anything away from any other styles of music, because I love all styles of music, but there's such a deep, ingrained love of our history, of our music here," he explains. "It got us to where we are today. The Hall of Fame is something that is very dear to all. To everybody in this industry and everybody in this town, it reminds us of the work that went in and the people that came forward and built the foundation that we all stand on."

The "Highway Don't Care" singer says he continues to be inspired by the role the Country Music Hall of Fame and Museum plays in country music today. "You look at the legacy, and you look at the histories of each individual artist and producer and musician and everybody that's really built what we got," he explains. "You look at their stories and where they came from, the road that they had to drive to get to where they got. Any level of success in this industry is a feat in itself, but to reach that sacred ring of honor in country music means that you've done something extraordinary."

Trace Adkins will also perform a couple of songs during the show, but he plans on mostly playing the role of a fan. "It's kind of like a family reunion of sorts," he tells The Boot. "We don't get to see each other too often. That's really the thing I love the most. Being at a show with a lot of my friends. It's that whole fellowship thing that's really cool about it. The importance of the Hall of Fame cannot be overstated. It's vital to this town, to this community, to this industry. We have to do all we can to make sure we put it forward to the world."

The "Celebrity Apprentice" contestant says the building evokes an emotional experience in him every time he enters. "I always go in there with a sense of reverence," he acknowledges. "It's pretty overwhelming. Everybody that's in there is somebody that has affected what I do for a living in some way. They all have. They opened the doors for guys like me to be able to come along and do what we do. There's always a sense of thankfulness and gratefulness and reverence. People come from all over the world to see the Country Music Hall of Fame, so it's something that we really need to take a lot of pride in and take stock in it, and make sure it's as good as it can possibly be."

We're All for the Hall, which will also include performances by Jason Aldean, Kris Kristofferson, Rosanne Cash, Loretta Lynn, Brantley Gilbert and several others, will be held at Nashville's Bridgestone Arena at 7:30 PM CST. A limited number of tickets are still available and can be purchased here.