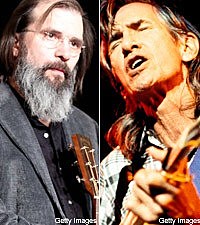 Steve Earle is 54, two years older than Townes Van Zandt was when the acclaimed singer/songwriter died in 1997. Time has not diminished Earle's love and admiration for his friend and mentor. He is releasing a 15-song album honoring Van Zandt, entitled simply 'Townes,' this week.

"Probably the first time I heard a Townes Van Zandt song wasn't from him, but from a singer named Mark Johnson who was performing at the Gate House in San Antonio, Texas," Earle tells The Boot. "He played 'Colorado Girl,' and I also remember hearing 'Waiting Around to Die' pretty early, too. Then I started to track down his records myself."

Earle first saw Van Zandt at a folk music festival in Kerrville, Texas, and was in the same room with him at Jerry Jeff Walker's 33rd birthday party in Austin, Texas.

"I was not invited to that party," Earle recalls with a chuckle. "Jerry Jeff and Townes' birthdays are eight days apart, so they were there together. I never got up the nerve to go and talk to him."

Not long after that, Earle was performing at the Saxon Pub in Houston, where Van Zandt was in the audience. "He heckled me constantly, asking me to play [Roy Acuff's] 'Wabash Cannonball,'" Earle recalls. "I didn't know that song, but I sang 'Mr. Mudd and Mr. Gold," which is a Townes song. That finally shut him up."

Earle and Van Zandt crossed paths many times after that night, both moving to Nashville to try to make a living in the music industry. Van Zandt had some success as a songwriter, with tunes like Merle Haggard and Willie Nelson's version of his classic 'Pancho & Lefty,' but he didn't sell many records on his own. Earle had early success with 'Copperhead Road' and 'Guitar Town.' Both men found a path paved with alcohol and drugs. Earle pulled out of it about 15 years ago; Van Zandt did not.

"There is survivor guilt involved here," Earle admits to The Boot. "I don't know why I survived; I made more money, even when I was f----d up, than Townes did. Do I think he was a misunderstood genius? No, I think he shot himself in the foot almost constantly. I was around Townes enough to know that the reason people didn't know about Townes was that he had a real problem with growing up fairly comfortable while not everyone else did. There was a part of him that was uncomfortable that not everyone had roof over his head and not enough to eat. For Townes to get compensated for what he saw as a gift, he wasn't comfortable with that, so he sabotaged himself." 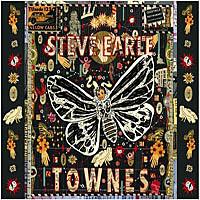 Earle recalls a moment when both men were going through their own bouts with individual demons: "I came home one day and Townes' truck was in my driveway," the singer recalls. "He was in my living room playing one of my guitars, and when I walked in he said, 'You look like s---; your arms look like s---.' Then he asked, 'You got clean needles?' and I said yeah. Then he said, 'Let me play you a song I just wrote,' and he played 'Maria.'

"Townes knew when he came out that day that he wasn't gonna drive me to a treatment center, but he tried. That is a precious moment to me. I can remember there were times I would think I was doing okay, because I was doing better than Townes. I feel guilty about that too."

Earle says it wasn't hard to make the album honoring his friend. He describes it as mostly exhilarating and exiting. "There was a lot of goose-bump moments," he says of producing the project. "Recording the album was more exhilarating than I thought."

Earle recorded 'Pancho and Lefty' first, recalling, "I was soaked when I finished, but I got it on the third or fourth take. I believe it is really close to a lot of live versions of that song that I heard him do. This may be one of the best records I've ever made."

The album honoring Van Zandt was made not only to pay tribute to the music, but also to the man. "I hope that people understand more than before about how good Townes was, and that they get that it was the songs and not the idea of Townes as some sort of tragic figure," says Earle. "There was more to Townes than doom and gloom. People don't talk about how funny he was, but he was hilarious. There were a lot of things tragic about him, but he was one of the best songwriters that ever lived."

The songs selected for 'Townes' were the ones that meant the most to Earle. In addition to 'Pancho and Lefty,' the disc includes 'Lungs' and 'White Freightliner Blues,' both of which he had to learn specifically for the recording. Another selection, '(Quicksilver Daydreams of) Maria,' he learned directly from Van Zandt.

Special guests on the album include Tom Morello (Rage Against the Machine/Street Sweeper Social Club), Earle's wife Allison Moorer and son Justin Townes Earle. 'Townes' is in stores this week.