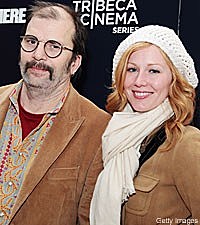 Allison Moorer and Steve Earle welcomed their first child, a baby boy, on Monday (April 5). John Henry Earle, who measured 21 inches long, arrived at 10:07 AM and weighed in at 8 pounds 2 ounces.

Baby John is apparently already familiar with Mom's music. Allison told The Boot back in February that he would move around a lot in her womb whenever she'd play songs from her new album, 'Crows.'

It's certainly been a monumental year so far for Dad Steve, who won his third Grammy in February. His album, 'Townes,' was named Best Contemporary Folk Album.

Allison and Steve were married in 2005 and live in New York City, though they tell us they'll spend more time at their home in Woodstock, N.Y., now that the baby is here.