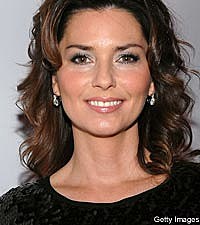 Thousands of fans braved sub-zero temperatures on New Years Day to witness Shania Twain run the Olympic Torch through her hometown of Timmons, Ontario. The Timmins Press reports that the bitter cold didn't chill the country superstar's enthusiasm. Shania jumped, smiled and waved to the crowd as she entered Hollinger Park and lit the Olympic cauldron, kicking off an evening celebration that carried on despite a wind chill factor of negative-39 degrees.

"It just feels really beautiful to be back up North in the cold," Shania told the crowd from the stage, as her son Eja watched. "It wouldn't be Timmins if it wasn't 40 below with the wind chill!"

Shania was the final runner on day-64 of the torch relay, which reaches its final destination on Feb. 12: the Opening Ceremonies for the Vancouver Olympic Games. "I'm extremely proud," she beamed. "It's a highlight of my life to be able to be here to carry the torch."

As a member of the relay team, Shania was allowed to keep the torch bearers uniform and purchase the torch she carried. The following day she donated the torch and her full uniform – pants, jacket, hat, shoes, and red mittens bearing the Canadian maple leaf – to the Shania Twain Centre in Timmons. As she presented her donation she pointed out the hockey tape she'd wrapped around the torch handle to ensure her grip."I thought that would be rather embarrassing if I dropped the torch!" she joked.

There will be no shortage of embarrassment during Shania's next media appearance. She served as a guest judge for American Idol's preliminary auditions in Chicago last August. The episode airs Jan. 19 on FOX-TV.