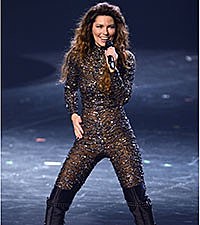 Shania Twain is back!

After an eight-year break from doing live shows, the country icon kicked off her first-ever "Shania: Still the One" headlining gig last night (Dec. 1) at the Colosseum at Caesars Palace in Las Vegas, Nev., where she'll be performing for two years.

Rocking a sequined black catsuit, the singer got a standing ovation as soon as she took the stage. "Thank you," she told the crowd, The Vancouver Sun reports. "Thank you so much ... you guys are going to get me all emotional, and then my eyelashes are going to fall off! This is a very overwhelming night. It's been a lot of years for me since I've been here. I realize what I've been missing, thanks to you."

The 100-minute show showcased Shania's hits and featured theatrical surprises -- like two different horses trotting onstage during her songs "Ain't No Quitter" and "You're Still the One."

After being in vocal rehabilitation for years for a medical condition called dysphonia, which causes the muscles in her throat to squeeze her voice box, Shania seemed happy to be back on stage and interacting with fans. "I know I'm talking a lot," she reportedly said. "But this is the first opening night -- I can't help myself!"

In a press conference before the show, Shania shared what she was doing to protect her voice, according to The Las Vegas Sun. "I am being very conscientious," she said. "I take a lot of steam showers, and [former Colosseum headliner] Bette Midler has recommended some [throat] sprays. Everybody has given me their little tips, and I'm just being very careful. I take good care of myself."

Besides the glitz and the glamour of the show, the concert aimed to show concert-goers a more personal side of Shania as well. Inviting her younger sister Carrie Ann on-stage, the two shared their first public duet since they were young teens. (She laughed at the press conference beforehand, "My baby sister never wanted to be a part of the show. She sounds identical to me, but if anyone hits a bad note, it's her.").

Back on stage, Shania opened up to the crowd about her past and the tough times her family overcame. "We were the hicks from the sticks," she shared. "We really didn't have much."

According to The Sun, Shania also paid tribute to her mother at the concert, who passed away with Shania's stepfather in a fatal car accident when Shania was 22 years old.

"I talk about my mother a lot because I miss her," Shania said. "She passed away a long time ago and she never got to see any of my success ... I wouldn't have made it onstage without her. So it's kind of sad she couldn't see it."

Hoping to inspire the crowd, Shania conveyed an uplifting message to her fans. "I want you to forget all the troubles that are waiting for you on your cellphones when you go," she said. "We're here to cheer up."

The first night proved to be a success and Shania has many more to look forward to -- she has committed to doing 120 shows at the Colosseum over the next two years. The singer also recently opened up that she hopes to record a new CD in the near future.