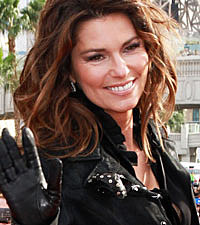 Shania Twain will kick off her two-year headlining gig, "Shania: Still the One," at Caesar's Palace in Las Vegas tomorrow night (Dec. 1). The songstress, who has spent the past several years intentionally away from the spotlight, says she weighed many factors before choosing to head back to work.

"Getting back on stage was a personal challenge more than anything," Shania admits to USA Today. "I didn't have a need to carry on developing my career or anything like that. I've had a very fulfilling career, and I'm very grateful for where I've come. But there definitely were some personal challenges that I thought I needed to face, and some pleasure that I've missed during earlier peak periods of my career, that I wanted to fulfill. And also, I want my son [11-year-old Eja] to see what I do. When I got off the road on my last tour, he was too young to remember, he was only 3 1/2, so he's now going to really get to see what Mommy does."

The country music superstar finds says finding time for her career is a constant balancing act. "I had focused for years on just my family, my son and personal life," she explains. "I was cooking and 'Mommying,' and doing all of those things. Now all of a sudden I was having to think about how am I going to balance this gigantic career demand and still be a good mother, be a good wife and be good to myself as well."

Shania, whose most recent studio album, Up!, was released 10 years ago, hopes to record a new CD in the near future as well, if she can find the time. "New songs have been being written for several years now, so in this big gap that I've been off stage and out of the studio, I have been writing music. "I can't wait to get back in the studio but then this whole Vegas thing came around and put this record on hold ... Get Vegas on the way and then I will get back in the studio and start working on recording those songs."

Tickets for "Shania: Still the One" can be purchased here.