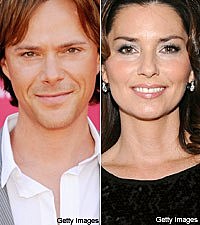 Bryan White, who has charted 17 singles on the country charts, including No. 1 hits 'Someone Else's Star,' and 'Rebecca Lynn,' was asleep on his tour bus in 1997 when he got a phone call that shocked him beyond his wildest imagination.

"I was asleep on the tour bus in Chicago, Ill. -- it was the era of no cell phones. We had this analog phone on our bus that we only used for emergencies. We got a call on it, and my tour manager came and woke me up, and said, 'You need to get up.' 'I said, 'What for?' He said, 'Just get up, you need to get up ... Mutt Lange and Shania Twain are on the phone.' I was clearing my throat and trying to wrap my mind around why I was talking to Shania Twain and Mutt Lange at 9 o'clock in the morning because, for me, back then, 9 o'clock in the morning was an ungodly early!

Shania was calling, of course, to ask Bryan to duet with her on 'From This Moment On' -- the love song that is now a country classic.

"They asked me just point blank, 'We have a song on our next project that we think you would be great on. (She said) How would you feel about being my duet partner?' I said, 'Absolutely.'

"Typically I'll make a joke when I'm in a scenario like that when I'm shocked. But I was just very business like, and I said, 'Absolutely, I'd love to do it. Tell me when to be there.'

"Of course, after I hung up, I was turning cartwheels. They were writing the song – I think they were in the process of finishing it. So they sang the chorus to me, and they wanted me to sing it back to them so they could make sure that they tracked the song in the right key so I ended up singing with them a little bit on the phone to figure out the right key. Then I hung up, said 'Thanks,' and a month or two later I was in Lake Placid, N.Y., singing a duet with her. It was a great experience. I had so much fun, and it's one of those surreal, storybook, fairytale kind of feeling that you kind of wish it would have lasted longer."

So why does Bryan think they picked him?

"I don't know," he confesses. "I've heard her ... I'm just quoting what she has said, so I'm not tooting my own horn, but I have heard her say that I am her favorite male singer in country music ... I guess through seeing me on CMT or hearing me on the radio or whatever, she just was drawn to what I do. She just said she loved my voice and thought I would be great for the song. I'm so proud of it. The thing about records is: once they're down, they're down. They're just etched in stone. It's like carving your name on a tree. It'll always be there. People will always be able to listen to that. My kids will always be able to listen to that, and go, 'Wow, that's my dad.' I'm so grateful for that opportunity."

Bryan says he'd love to work with Shania and has faith that she'll make a huge comeback.

"If I know her, she's a songwriter and a singer. I think at some point, you've got to start making music again. And, the thing I hate for her is that what she does, I don't see any way she won't feel an immense pressure because of all the phenomenal things she's done. But I hope she approaches it in a way where she can just be honest with herself and write songs that mean something to her fully not thinking about whether it's going to be a major success. I just hope she does something really honest and doesn't let the pressure of the world and the industry get in the way of that creativity."

Bryan's latest album is titled 'Dustbowl Dreams.' He is currently on a radio tour promoting the single from that album, 'The Little Things.'