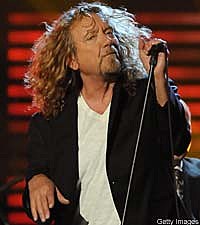 Robert Plant has put together a new band of renowned country musicians to go on tour with him this summer. His new tourmates, named Band of Joy, include Patty Griffin and Buddy Miller, who co-produced Robert's upcoming album on Rounder Records. In fact, everyone in Band of Joy played on the project.

The former lead vocalist and lyricist of Led Zeppelin will be hitting the road with his Band of Joy for a 12-city North American tour to preview new music, kicking off July 13 in Memphis, Tenn. and ending July 31 in Miami, Fla.

This is Plant's first project since his multi-Grammy Award winning collaboration with Alison Krauss on 'Raising Sand' in 2007. Alison will be touring this summer with her own band, Union Station, so she and Plant have no plans to record or tour together this year. However, the former rocker does say, "Alison and I get together quite often ... and sometimes we dance."

Plant's as of yet, untitled album is scheduled to be released sometime in late summer, or early this fall.

Filed Under: robert plant, Robert+Plant
Categories: Americana, Concert News
Comments
Leave A Comment
Back To Top
Garth Brooks' 'Stand' on CMA Ent. of the Year 'Is Still the Same'