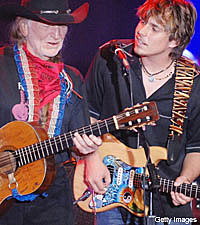 Willie Nelson's 21-year-old son Lukas is definitely a chip off the old block. He's been "on the road again" from the time he was an infant, riding on the bus with the Highwaymen. Now he's opening for his dad, with his band Promise of the Real.

Lukas tells the Athens Banner-Herald that his father's wanderlust has definitely rubbed off on him. "I grew up on the road. I really enjoy it. I just can't sit still for very long and I'm used to being in a different place within a short amount of time."

Lukas also admits that while he couldn't possibly pick one favorite song of his dad's, he is partial to one particular album. "There are tons of his songs that I love. He's my hero. I go through phases -- I listen to him probably more than anybody else ... I really like the 'Naked Willie' album that came out recently. I love a song called 'I'm Just A Memory.' Some songs I listen to over and over and over again."

The admiration is mutual.

"Rock, folk, Latin, country ... They have had all influences in their life, and it comes out in their music," Willie told The Boot, when we asked the legend to describe his son's band. "They're really talented kids. I'm proud of them."