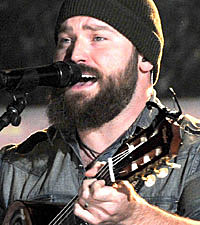 The Southern Ground Music & Food Festival returns to Nashville for a second year with Zac Brown Band and a who's who of musical friends along for the ride. The festivities take place at the Lawn at Riverfront Park, Friday and Saturday, Sept. 27-28, with ZBB joined by Willie Nelson & Family, Eli Young Band, Kacey Musgraves, Grace Potter and the Nocturnals, Edward Sharpe and the Magnetic Zeros, the Head and the Heart and Trombone Shorty & Orleans Avenue. Additional acts will be revealed soon.

The festival's hosts will be joined by celebrity friends for their "Super Sets." Kenny Chesney, John Fogerty and Jason Mraz will perform with Zac Brown Band at the close of both nights.

VIP ticket options are also available and include access to Zac Brown Band's customized Front Porch Stage Boxes, providing concertgoers with onstage seating and a gourmet meal prepared by a team of renowned chefs under the helm of Southern Ground Executive Chef Rusty Hamlin. Guests in the boxes are served complimentary beer, wine, liquor and non-alcoholic drinks, as well as gourmet cuisine from ZBB's mobile kitchen.