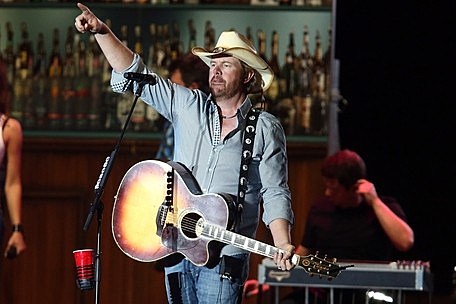 After weeks of speculation, Toby Keith has announced the date and lineup for his Oklahoma Twister Relief Concert. The star-studded benefit will take place on Saturday, July 6 at the University of Oklahoma's Gaylord Family - Oklahoma Memorial Stadium in Norman, Okla.

The tornado that ripped through Moore, Okla. on May 20 hit close to home for Keith -- literally. "I grew up in Moore, I live in Norman and I've got lots of family and friends who were directly affected," he says in a press release. "I know these folks and they're resilient, but we're going to keep helping them any way we can. I'm proud to get together with some others from around here who are just as committed as I am to supporting these communities."

The newly-announced concert will feature a number of other country music stars with deep ties to Oklahoma, including Garth Brooks, Trisha Yearwood and Ronnie Dunn. Willie Nelson is also slated to appear.

"Once we got the news that the tornado had hit Toby's hometown, Miss Yearwood and I told Toby we were at his service for whatever he chose to do," Brooks says. "I am amazed at the human spirit the tornado victims have shown. I am humbled by the giving of the volunteers. It is an honor to get to be a part of this healing process."

Tickets for Toby Keith's Oklahoma Twister Relief Concert will go on sale Friday, June 21 at 10AM. All seats are $25, with an eight-ticket purchase limit. More information is available at Keith's website.