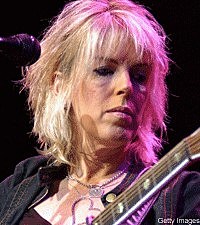 Lucinda Williams will follow her upcoming studio album 'Little Honey' with a digital-only EP comprised entirely of protest songs. The project, dubbed 'Lu in 08,' will feature four live tracks, including covers of Buffalo Springfield's 'For What It's Worth,' Bob Dylan's 'Masters of War' and 'Marching the Hate Machines Into the Sun,' which teamed Thievery Corporation and Flaming Lips frontman Wayne Coyne. Williams' own new tune 'Bone of Contention,' which was originally intended for 'Little Honey,' rounds out the collection.

"It's a pretty powerful protest song," Williams told Billboard.com. "The track didn't come out the way I wanted it to (in the studio). We went out to do some shows, and I played the song live by myself at Summerfest. It just came out killer."

Check out Lucinda Williams on tour
on TourTracker.com