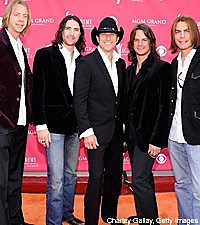 The Lost Trailers are heading down different roads, with each member of the group setting out to pursue their own projects by the end of the year.

"I'm thrilled to finish playing out the shows on the calendar for our fans; we've been blessed to have their unending support over the years," said Ryder. "I'm very much looking forward to the next phase of my career."

"We started this band as a bunch of high school friends with a dream of making music, and we've taken that dream to incredible places that have opened a lot of doors for us," Stokes adds. "I look forward to thanking the fans on our tour dates throughout this year; they've always been there for us. I'm excited for the future, continuing to create new music that becomes part of people's lives."

The band officially formed in 2000 after Ryder and Stokes both gravitated towards music in high school, where they convinced another student, drummer Jeff Potter, to join them in a band named Ryder Stokes. Stokes' younger brother, Drew, became their bassist and moved over to keyboards when Manny Median joined the group.

Changing their name to the Lost Trailers after literally losing three equipment trailers to thieves, the group released two independent albums before signing a major label deal. Their fifth and final album, 'Holler Back,' peaked at No. 5 on the country charts.

The Lost Trailers on AOL Music