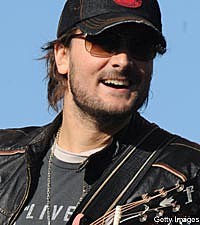 Eric Church strutted into the backstage area, hot off a blazing set on the main stage of the Country Throwdown tour stop Sunday in Bristow, Va., just outside of Washington D.C.

Whipping off his dark shades, he nodded to those greeting him and complimenting his fiery set, which included everything from growls at the audience to guitar duels that made one think Eddie Van Halen might have a new challenger for his guitar-king crown. The show was designed, as Eric said in his own words, to metaphorically "rip people's faces off."

If the screams of the crowd rushing the stage during the North Carolina native's set were any indication, he more than met his goal, bringing the audiences to deafening shrieks. Eric -- who was moved to the Main Stage after fans insisted concert organizers bump him up from an acoustic set on the Outlaw Stage -- made the fans especially happy when he mentioned greats such as Johnny Cash and Merle Haggard. 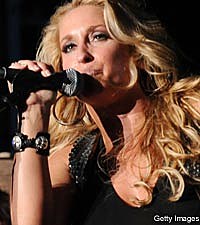 "The Throwdown tour is such a cool concept," Heidi Newfield told The Boot after her own crowd-pleasing set that had fans weeping as she sang a new ballad, 'Why You Have to Be So Good.' "It's this wonderful combination of a big show, an outlaw stage, which is real raw music, and the Bluebird Stage which is very intimate. Eric is a good example of someone whose music is very diverse, [sometimes sounds] almost like rock."

"I was worried when we started this tour that the more established artists would be in one [group of friends] and others of us wouldn't be invited in," Emily West admitted to The Boot backstage. "It couldn't be more different. Not only is everyone incredibly supportive, but we have developed deep friendships. We are really bonded for life."

Emily also pointed out she was especially surprised that her and other artists have been continually invited onstage to perform with the big names. "Sharing the stage, that's really old school, It's not all about 'me me me me me.'"

Forget the notion that musicians that play on the main stage of big festivals can't mix it up at all. True, the events are carefully orchestrated to lessen the chance for time and technical snafus, but that doesn't mean artists can't infuse their sets with fun. They certainly did at this show, and, despite tornado warnings, the thousands of fans who packed the amphitheater couldn't get enough. 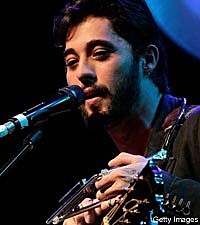 Although Ryan Bingham is a man of few words on stage, his dark, gravelly voice, combined with the gloriously emotive playing of his band, sent the crowd swooning as he belted out an array of hits including, 'Hard Times' and 'The Weary Kind.' A definite treat for fans who got the chance to see him on the his last night on the tour.

One of the show highlights was when Montgomery Gentry brought veterans on stage as they sang 'Something to Be Proud Of.' The gesture, again, brought some in the otherwise raucous crowd to tears and then joy as they celebrated country artists and freedom.

When Heather Morgan took a few minutes after her set to reflect on the friendships she's made, the fans she's met and the advice she's received during the tour, she couldn't help but smile.

"I told my mom this is the happiest I've ever felt. And I know happy. But this ..." she gushed.