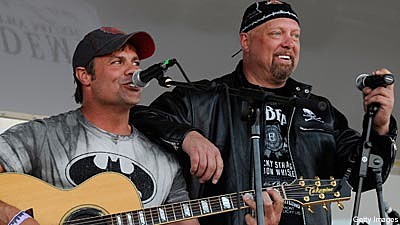 The Country Throwdown tour, which launched May 14 in Florida, pulled up stakes and wrapped in Mountain View, Calif., last week, and all of the artists will take new friendships, great memories and possible hit songs with them as they part ways.

The trek featuring such acts as Montgomery Gentry, Jamey Johnson, Little Big Town, Jack Ingram, Eli Young Band and Heidi Newfield, among others, as well as a bus full of songwriters, including Sarah Buxton, Dave Pahanish ('American Ride,' 'Do You Believe Me Now?') and Troy Olsen ('I'll Just Hold On'), would ride each other's buses, pull out their guitars and jam together and even have a dance party or two along the way.

The Lost Trailers' Stokes Nielsen says he got to see a lot of amazing performances while on tour, as well as see firsthand the camaraderie shared between acts. "What's really great is you go out after your show and you're walking around the festival and you see the songwriters' stage and it's packed with people too," Stokes tells The Boot. "You've got the songwriters' stage packed with people, you've got an outside side stage that Heidi Newfield is headlining, just blowing everybody away. And Jonathan Singleton, he's another one. I've been absolutely blown away by that guy. I think he's an absolute talent, great songwriter. He writes these great songs and then he gets up there on guitar and just absolutely wails on it. It's amazing. So, I think it's great that everybody travels together ... It's like a gigantic, touring, family country music road show. It's awesome. It's unlike any other tour that we've been a part of!"

Since most acts on the Country Throwdown tour are also songwriters, it comes as no surprise that many of them have been writing together almost on a nightly basis. "As a songwriter, I'm definitely into collaborating with everybody on tour," says Stokes. "The Eli Young Band is a band I've always admired, and we've kind of come up the same way. Jack Ingram, I think, is absolutely awesome. Jamey Johnson, a couple of years ago, gave me this song, and he was like, 'Man, I was thinking of you boys when I wrote this song. It's called 'Home Ain't Home No More,' and it's about a guy that his girlfriend steals his trailer and leaves him.' And I thought, 'That could fit us pretty good.'"