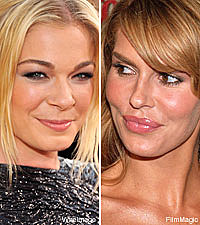 LeAnn Rimes has apparently moved in down the block from boyfriend Eddie Cibrian's estranged wife Brandi Glanville and her two children, and Eddie's ex isn't feeling particularly neighborly toward the singer. She tells US Magazine that LeAnn is a little too close for comfort, and that her run-ins with the singer in their Calabasas, Calif., neighborhood are not pleasant.

"She's moved in a half a mile from my house and a block from my son's school," says Brandi. "She is completely space invading me at the moment, so things are not cool. There is a point where she needs to have a sensitive side and back the 'f'' up. Honestly, she's single white female-ing me. She wants my life. She wants my kids. She wants my husband. She can have most of everything but just not my children or my family."

Brandi says she even spotted LeAnn in front of her six-year-old son Mason's school as she picked him up. She says she tries to maintain peace in front of the children in spite of the uncomfortable situation, adding that they are "the most important thing in their lives."

In June, a couple of months before filing for divorce from her actor husband, Brandi characterized herself in US Magazine as "a happy wife fighting for what I have." LeAnn and her husband Dean Sheremet filed for divorce just a week after Eddie and his wife called it quits.