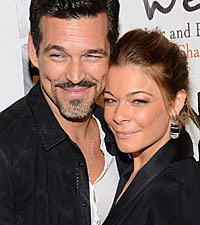 Are LeAnn Rimes and Eddie Cibrian ready for prime-time? The couple are reportedly pitching a TV sitcom based on their lives. A source claims the pair, who have been married two years, "would play versions of themselves, kind of like on 'Curb Your Enthusiasm.'" The insider adds that "the show will have a crazy ex-wife," presumably portraying Eddie's ex, Brandi Glanville (with whom LeAnn has often engaged in a public war of words). Eddie's two children with Brandi, if depicted in the series, would likely be portrayed by actors. [US Weekly]

The Henningsens debut album, American Beautiful, is set for release July 2. The family band (Clara, brother Aaron and their dad, Brian) will also hit the road for Brad Paisley's Beat This Summer tour. "American Beautiful," the trio's debut single, which they penned with Brett Beavers, is closing in on the Top 20. Watch the song's video below.

Lee Brice and Jerrod Niemann, who were in Las Vegas for last weekend's ACM Awards, don't party like they used to. With Lee's upcoming wedding in mind, the pair thought a bachelor party was in order. But no "Hangover"-style hijinks took place. "We never even left the casino," says Jerrod. "So I guess our partying days have peaked and we're on the other side." Lee revealed to The Boot that his fiancée and their son would be joining him in Vegas for kid-friendly activities. [Taste of Country]

Kelly Clarkson revealed backstage at Sunday night's ACMs that Blake Shelton would not only be singing at her upcoming wedding to Brandon Blackstock, Blake's manager, he would be officiating the ceremony as well. It's a task she knows the notoriously fun-loving singer will undertake seriously and soberly. "He plays that persona up, but he's very serious," Kelly explains. "He loves it. He's so into it and he can be very sentimental, you don't know how to take it." While Kelly was spilling wedding details, another singer has been spilling some news. Ronnie Dunn posted a Facebook status update Sunday night that read, in part: "I'm singing on her Christmas record." No other details on a Kelly Christmas album have been released. [The Country Vibe]

Dwight Yoakam plays a sold-out show at Nashville fabled Ryman Auditorium Friday (April 12). No tickets? If you're a SiriusXM subscriber, you're still in luck. The concert airs live on SiriusXM's Outlaw Country, channel 60, beginning at 10:00 PM ET. It will be re-broadcast on July 4.

Clay Walker will appear on Thursday's (April 11) episode "Auction Kings," which airs on the Discovery Channel at 9:00 PM ET. The show will visit one of the country's most famous auction houses, Gallery 63, in Sandy Springs, Ga. [Discovery]

GAC's "Farm Kings" returns for a second, heartwarming season this Thursday at 9:00 PM ET. The beloved King family is expanding, this season taking in cattle and pigs, yet they may lose one of their own, as Dan contemplates a job outside the farm. The brothers also plan a "Win a Date With a King" auction to benefit the Special Olympics, in honor of youngest brother Ben who has Down syndrome. (See a photo of the inspiring King family below.) [GAC] 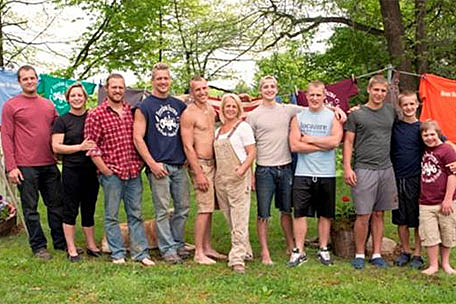