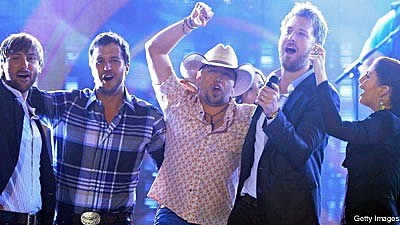 Lady Antebellum, Luke Bryan, Miranda Lambert and Jason Aldean are just a few of the members of the new generation of country entertainers who've really brought on their A-game in the past year. Since these singers and songwriters all came on the scene around the same time, it's no surprise that they're also becoming friends, as well as peers within the industry.

One of the best examples of this camaraderie is Luke's recent hit, 'Do I,' which he wrote with Dave Haywood and Charles Kelly of Lady A. The third member of that trio, Hillary Scott, sang backup on the record, which shot to the No. 1 spot on the country singles charts. At the time Luke's single was climbing the charts, Lady Antebellum was at the top with 'Need You Now.' They have all been quoted as saying that they were cheering as hard for Luke's single as they were for their own. (The foursome even sang 'Do I' together in our studio! Watch it here.)

Charles says it's no surprise to him that all the new singers are forming friendships with each other. "We're all like-minded, with similar interests, and at the top of that list is music," Charles tells The Boot. "I don't think you see that so much in any other genre of music, where people form friendships like you see in country music. When you see people like Reba [McEntire], Brooks & Dunn, George Strait, where they're close, we'd love to have that kind of thing among all of us. I hope that you'll see it all come together where we're rooting for each other, singing on each other's records and singing together, and get to experience this ride together. We want to be doing this for a long time."

"I think a lot of it stems from the fact that we are songwriters -- Luke writes a lot, Miranda does and we do," Dave adds. "It's fun to get together with other artists, where we're writing and collaborating on different things."

"Having each other to work with is so much fun, so it's only natural for us to gravitate toward people who love what we love," Hillary points out, "and becoming friends with them is icing on the cake." 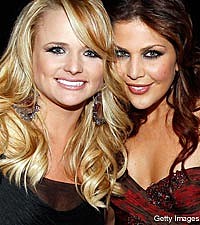 Miranda Lambert, who paired with Hillary to write songs when they were on tour together, agrees. "I think it's cool. Back at the ACM's we were all happy for each other when someone won an award," she insists. "Country music is like a family, everyone knows everyone, there's no competition among us."

Jason says it's great when artists with similar interests and backgrounds tour together so they can get to know each other. "When Luke was on tour with me this spring, we hung out almost every day. Then he went off to tour with Miranda and we didn't see each other for a while. The first chance we had to get together, which was in Nashville during CMA Music Fest, we went to dinner and just sat around and caught up on everything."

Occasionally new artists in town become friends through writing before either of them gets a record deal. Such was the case with Jamey Johnson and Randy Houser, who penned the hit single 'Honky Tonk Badonkadonk' (with Dallas Davidson) for Trace Adkins. Now they each have record deals and have been on several tours together, sharing the stage individually and then merging their show into one. Randy says the two have even talked about doing a duet album.

"It's probably something that would include other people," he explains. "We did some stuff together on last year's CMT tour and there's tape of that somewhere."

Read our joint interview with Randy and Jamey here.

Filed Under: Lady A, Miranda Lambert
Categories: Exclusives
Comments
Leave A Comment
Back To Top