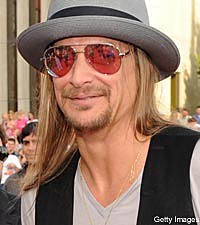 If you're looking for Kid Rock's music catalog on iTunes, don't bother. The singer, who had a Top 5 country hit with 'All Summer Long,' has refused to put his albums on the popular music service thus far, because he believes artists don't get paid enough for those downloads.

And never one to shy away from controversial statements, Kid says he doesn't mind if fans obtain his albums -- or other things -- illegally.

"I don't care. I want you to hear my music so I can play live," he tells the BBC News website. "I don't agree with it. I think we should level the playing field. I don't mind people stealing my music, that's fine. But I think they should steal everything. You know how much money the oil companies have? If you need some gas, just go fill your tank and drive off, they're not going to miss it."

He adds however, that he doesn't have to take his own advice on that issue. "No, I don't steal things. I'm rich," he says. And even though not being available on iTunes resulted in a 10-20 percent loss of sales for his latest album, 'Rock 'n' Roll Jesus,' he's hardly worried.

"I've just sold a million records, I'm not really feeling that blow," he says of the chart-topping disc.

Kid says one of the biggest problems with the popular online music retailer is that it's based on "an old system, where iTunes takes the money, the record company takes the money, and they don't give it to the artists."

He likens the situation to that of classic rock 'n' roll acts who famously battled with their respective record labels to be compensated fairly.

"Back in the day, we all know the stories of the Otis Reddings and Chuck Berrys and Fats Dominos who never got paid," he says.

The performer, born Robert Ritchie, say his record label, Atlantic, asked him to "stand up for illegal downloading" a few years ago because, they alleged, 'people are stealing from us and stealing from you.' "And I go, 'Wait a second, you've been stealing from the artists for years. Now you want me to stand up for you?'"

He adds, however, that all of his music will be available on iTunes eventually. His 1990 album 'Grits Sandwiches for Breakfast' is already there, because it's the only one to which he doesn't own the rights.

"I can't avoid it, but I like to always stick to my guns and prove a point and do something original and because I believe in it," he asserts.

In addition to Kid Rock, The Beatles, AC/DC and Garth Brooks are the only other major acts who have still not made their music available on iTunes.

Weighing in on the issue, Garth, who is second to the Beatles in US record sales, has said he wants fans to download only full albums because each one is a complete work, with the songs designed to be heard together.

"We do albums, we have always done albums," Garth told the BBC News website. "And if people try to make it a money issue, I can get the full album to the consumer for much less than they can get it at 99 cents a song."

According to a recent survey, iTunes has displaced Wal-mart as the country's No. 1 music retailer.