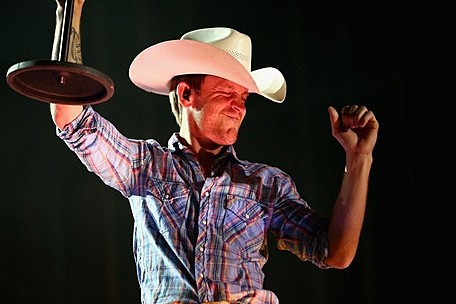 Justin Moore has revealed the title, release date and track listing for his upcoming third album. The record is his first studio effort since 2011's 'Outlaws Like Me.'

Moore will release 'Off the Beaten Path' in September, and he says the album is a step in a slightly different direction.

"It's been two years since we've released new music and I'm beyond excited to get these 16 songs out to our fans," he states (quote via Country Music Is Love). "I will always remain true to who I am, but there are a few curveballs that show my sense of humor and take our fans 'off the beaten path.'"

'Outlaws Like Me' went Gold and scored Moore four hit singles, including 'If Heaven Wasn't So Far Away' and ''Til My Last Day.' He's enlisted a couple of heavy hitters to help him out with 'Off the Beaten Path.'

"We want to step it up every time, and I really feel like this collection of songs allows us to reach out in ways we haven't yet," Moore observes. "I've also never done a duet so it's really cool to have both Miranda Lambert and Musicians Hall of Famer Charlie Daniels agree to join me on a couple of songs."

'Off the Beaten Path' is slated for release on Sept. 17 via Valory Music Group. The album's first single, 'Point at You,' was released on March and is nearing the Top 20. Moore is planning a 60-date tour in support of the new album.